I decided I wanted to take a look at the consumer preview of Windows 8 using some virtualisation software.  I had some previous experience of VirtualBox – all good – I used it to run an Ubuntu installation on my PC (Dell Latitude D630 running XP SP2) which was real handy.

3. Setting up Virtual Box is easy – pretty much a case of accepting the defaults.  In order to create a virtual machine click New in the top left corner.  The following dialogs appear:

a. Virtual Machine (VM) name and OS Type – the name for your virtual machine and the OS ‘group’ and version – there’s an option for Windows 8 here in the Microsoft Windows group.

b. Memory – how much RAM you want to allocate the VM – I accepted the recommended 1024Mb.  You should probably consider increasing this if you have it available.

c. Startup disk – here I chose to create a new virtual disk – this is the virtual disk that the OS will be installed on – like the C drive of your machine.

d. Type of file for virtual disk – changing the type enables you to create a disk which can be used by other virtualisation software but i’m not familiar with the formats – I just accepted the default – VDI (VirtualBox Disk Image).

e. Virtual Disk Storage details – allows you to choose whether the virtual disk can grow in size if it needs to.  Again I chose the default – Dynamically Allocated.

f. Virtual disk file location and size –   I took the recommened size (20GB) and changed the location to suit my needs.

g. Finally hit Create and your machine will be set up ready to run and install the OS.

4. In order to install an OS on your new virtual machine, select it and hit Start.  The machine boots up and asks you for the location of the Windows 8 ISO.  Once selected you just have to follow the prompts to install Windows 8 Consumer Preview on the machine.

I had a couple of hitches at this point – nothing major.  The first was this: 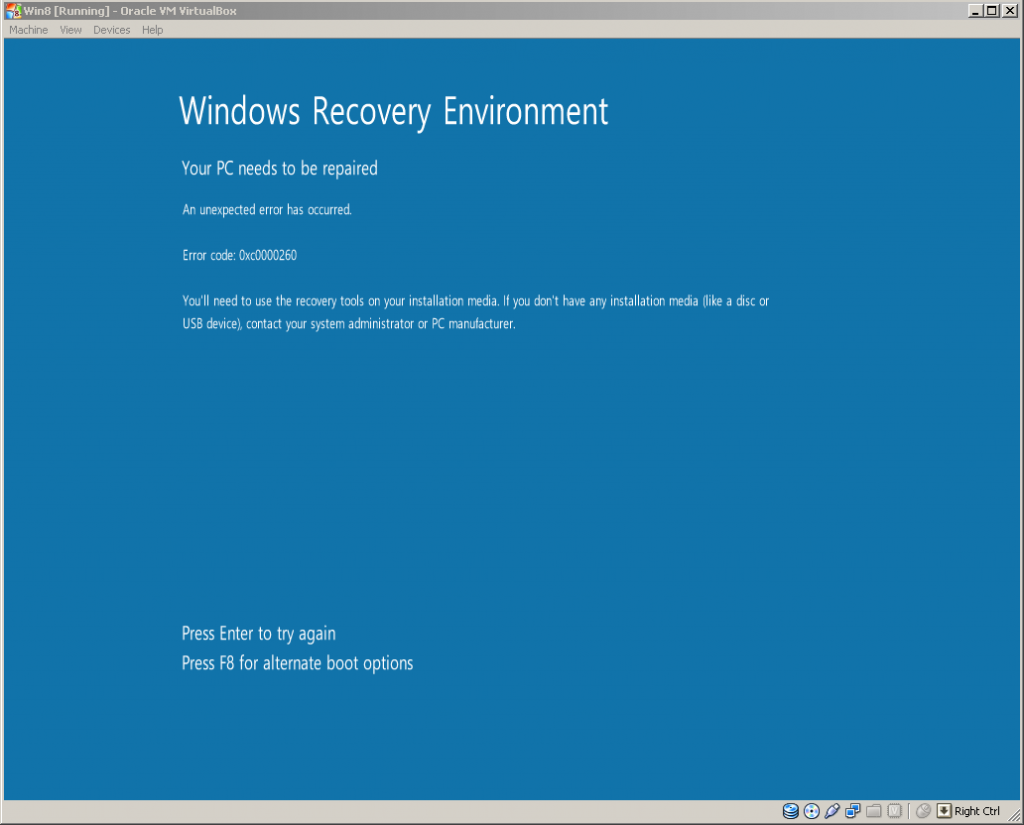 I googled a bit and found this forum posting – an answer in the thread fixed the problem – I had to enable PAE/NX (something to do with addressing?) in the VirtualBox VM settings – (Settings->System->Processor->Extended Features)

I then ran into this: 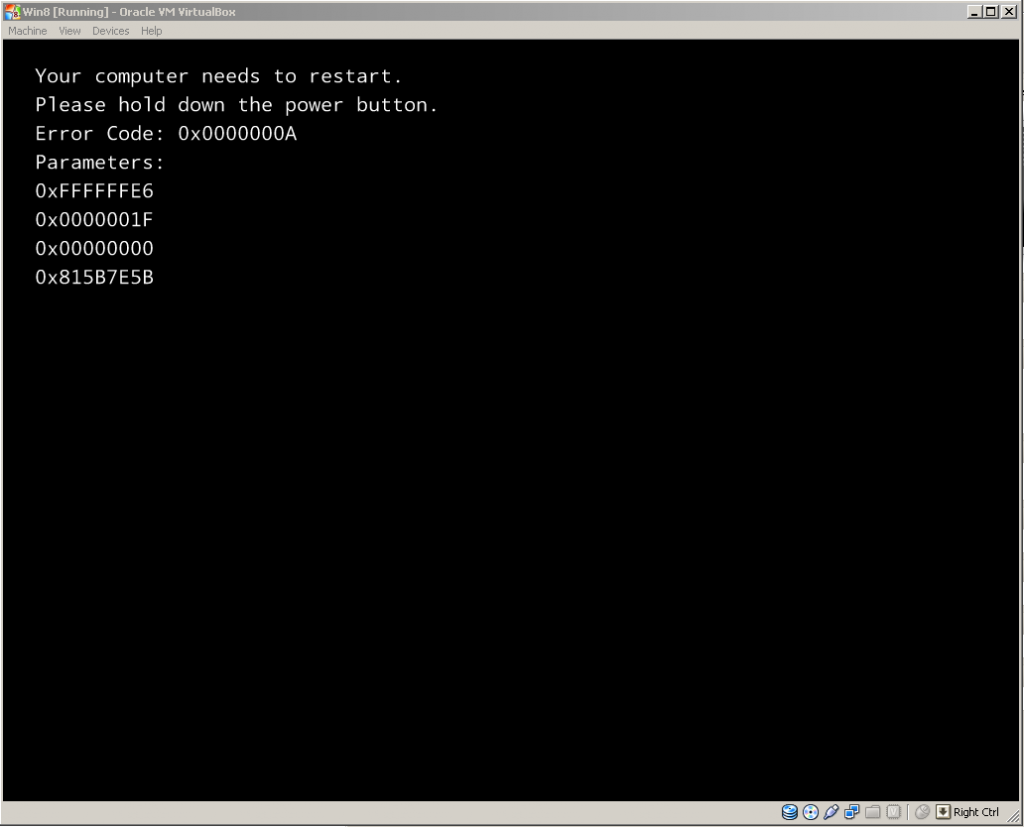 I should have realised what this was as I was also getting the following message when the virtual machine started – it really was trying to tell me something…however I ignored this and after a bit of needless googling (binging) – I basically realised I should have enabled virtualisation in the BIOS. 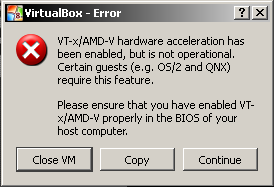 So once I’d enabled PAE/NX in the VirtualBox VM and enabled Virtualisation in the machine BIOS I was all set and the Windows 8 installation process started.  After ensuring that I selected Custom Install only (i.e. non upgrade) I was on my way…..accepting defaults in dialogs ;).

I guess the whole point of this post was really to see how much of the interface design has been taken from Windows Phone (I’ve recently been using a Nokia Lumia) and used in Windows 8 (or vice versa).  Well the answer is lots – check out the screen saver which is dismised by clicking and dragging (swiping) upwards…..just like on Windows Phone. 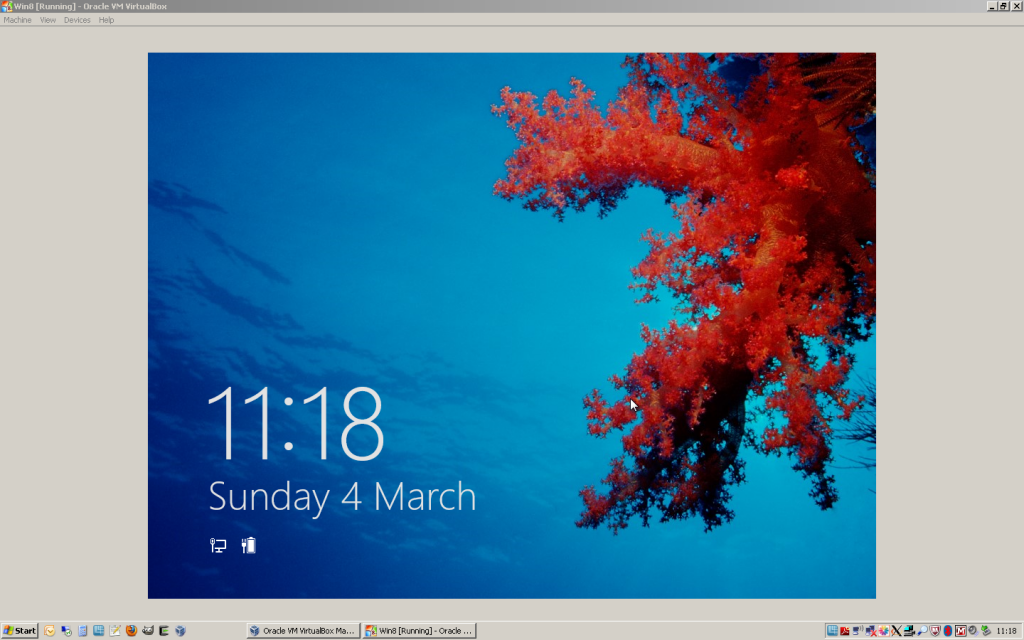 After logging in you are presented with a series of tiles – just like Windows Phone.  These tiles allow you to start IE, launch apps or return to the traditional desktop.  It definately lends itself to a monitor which supports touch…. 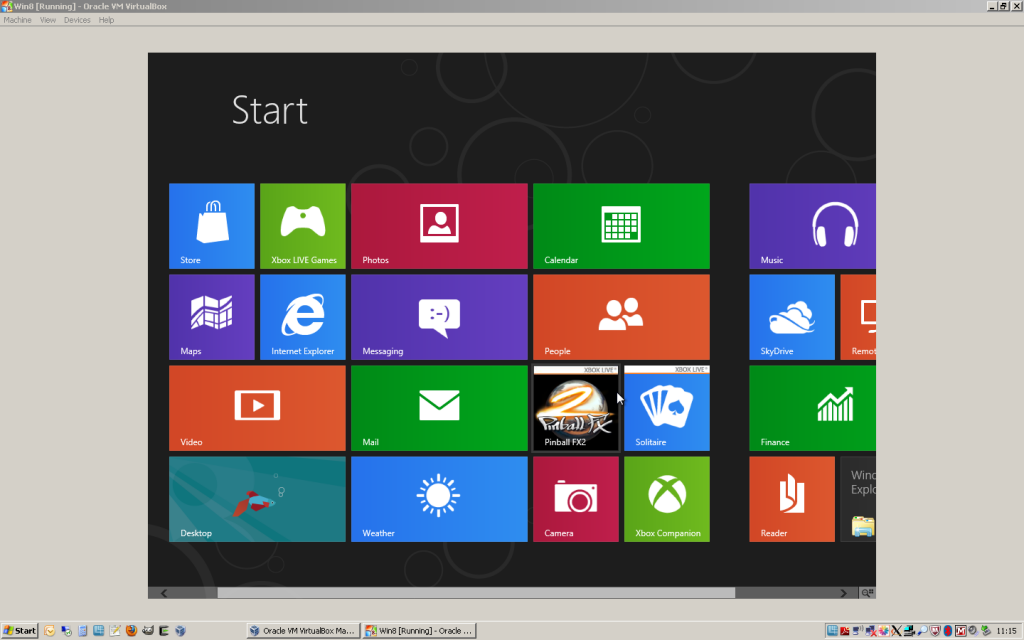 There is also a People Hub as on Windows Phone.  At first this thing is greedy and pulls all your contacts into one place (regardless of whether they are Twitter, Facebook, Windows Live).  This might seem like a bad idea to some people wanting to keep things seperate but you can control the contact sources you see and it kind of forced me to tidy my contacts up a bit. 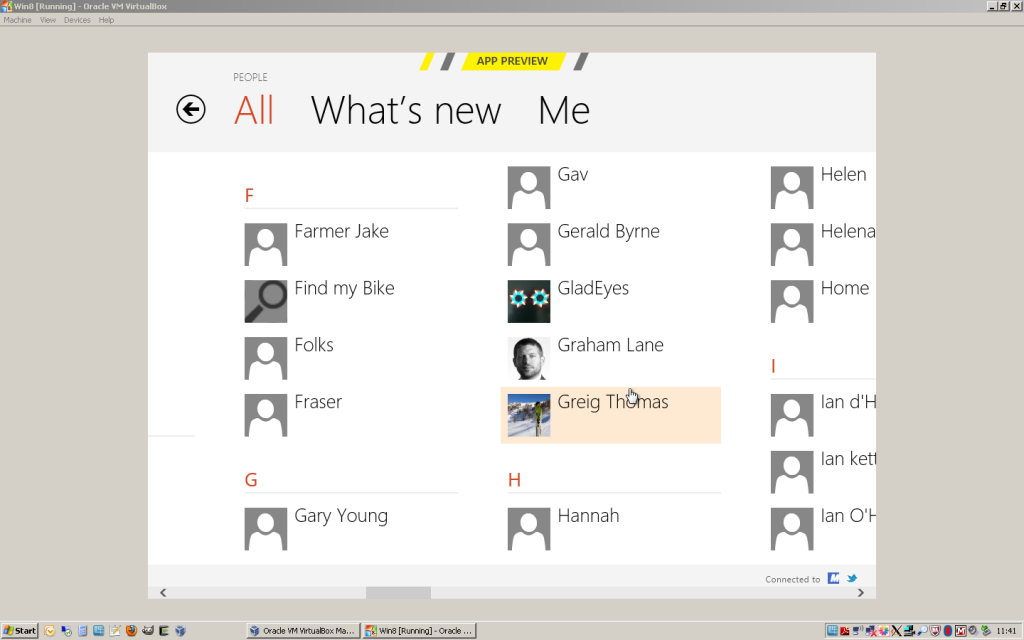 When you launch Internet Explorer from one of the live tiles you are given a tablet version as shown below: 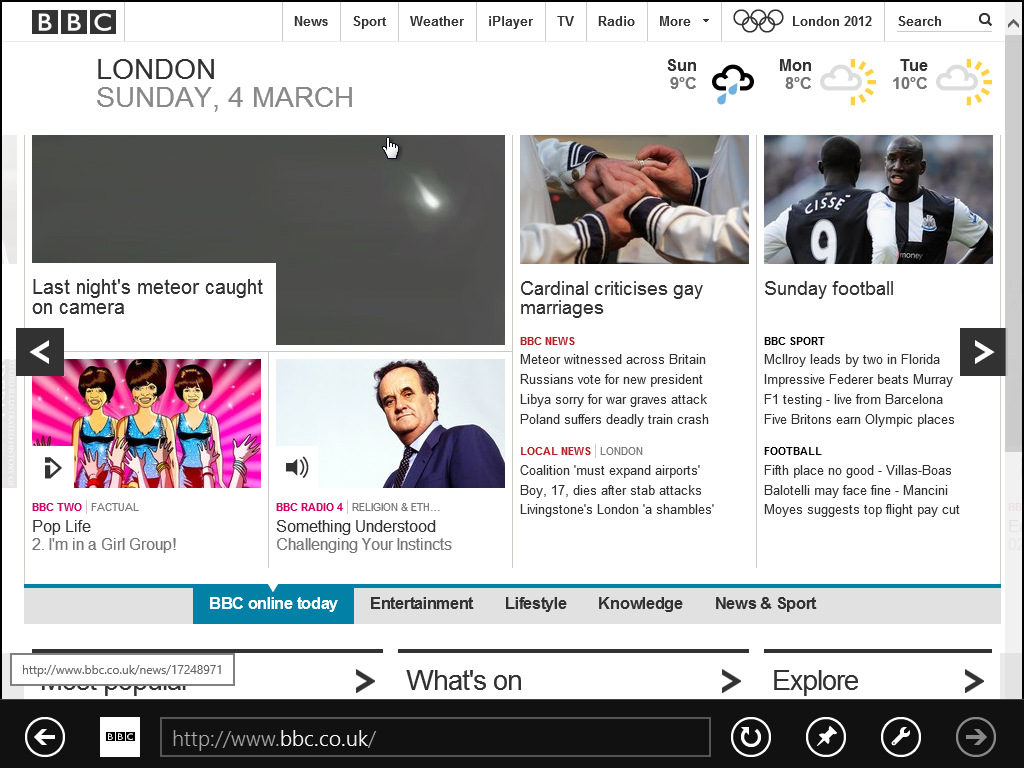 If you go to the desktop and launch IE you’ll see the more traditional version of the app: 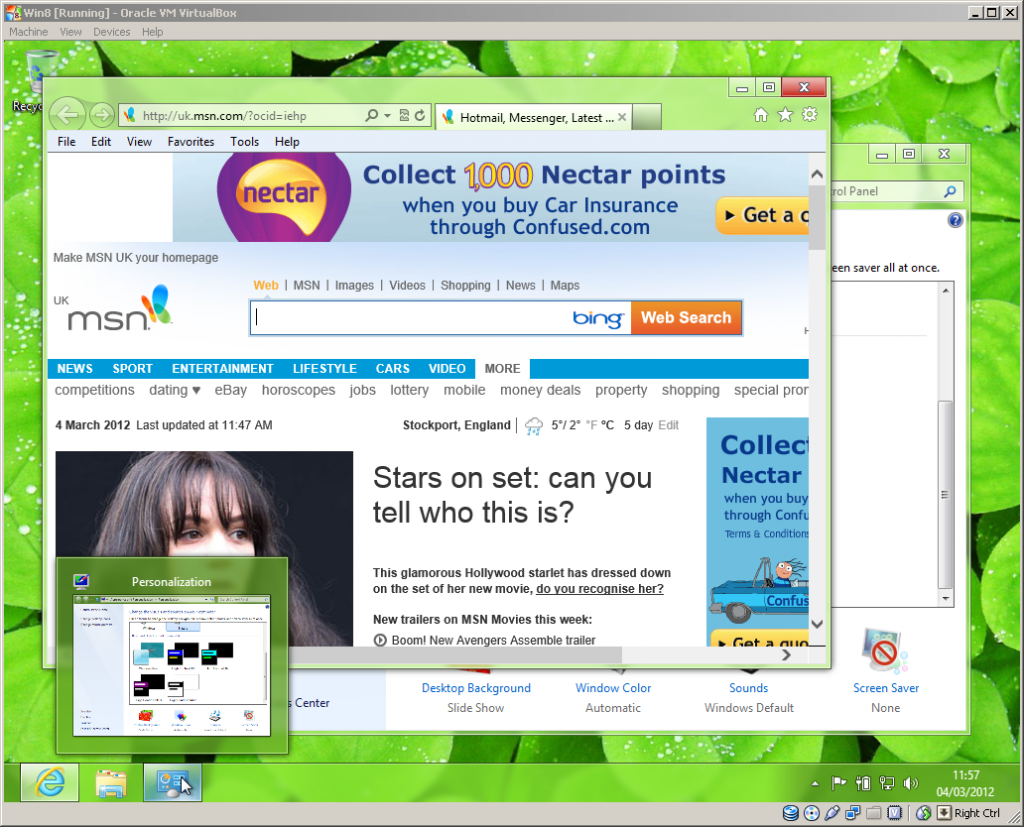 One thing I noticed about the ‘traditional’ desktop is that the start button was gone – there’s probably a menu option to re-enable it but I could’t see it – it felt as though my left arm had been removed so used to pressing that thing since the days of Windows 95.  In order to return to the tile view you can press the windows key.

So from a very brief introduction there does seem to be lot’s of crossover between Windows Phone and Windows 8 from an interface point of view.  In some ways it also feels kind of seperate – not really the totally integrated experience I was expecting, which might not be a bad thing, offering the best of both worlds to users.

Anyway – there you have it.  This weekend’s mini-adventure/task complete.