Browse: Home » GPSjake – old code I dusted down, jazzed up, tucked in and finally put to bed.

GPSjake – old code I dusted down, jazzed up, tucked in and finally put to bed.

One of the reasons behind me starting this blog was that it would give me a resting ground for a little app I worked on quite a while ago (and for quite a while) but did nothing with.  A place where I could document it a little, post the source code for prosperity and finally put the thing to bed.

I’ve spent some time over the last couple of months re-visiting the code and updating it to work with a more modern smartphone (OK so only slightly modern – at least it has a touch screen!) – the Nokia N8.

GPSjake was my attempt to use the phone as a bike computer / sat nav. I used to find having to take a map out of my pocket all the time whilst on the bike was a pain – my initial idea here was to have the route loaded in my phone and have directions played to me in a headset.  The route would be worked out in advance (as you would work out a route on paper map) rather than ‘calculated’ and the prompts that are to be played at the various decision points are pre-recorded by the user (e.g. turn left at the church etc). I liked this idea as it still required someone to read and understand a map rather than rely on route calculated by software.

I’ve been thinking about bikes and navigation, off and on, for a long time – when I just think back now – a *real* long time. I could maybe have done something more useful with this time – but I’m afraid I didn’t. Anyway, I’ve got some notes in a notebook from December 2004 which outline the basic idea – the notes talk about using a PocketPC! I must have started developing the application properly sometime after I got my first ‘smartphone’ (Nokia 6630) in June 2005 when I realised that a PocketPC was no longer a necessity and using a smartphone was the way to go. The app was a great way to teach myself J2ME and sparked an interest in mobile phone development in general.

Initially, for GPS (there was no internal GPS on 6630) I used a NAVMAN bluetooth receiver (I used to work for NAVMAN between 2004-2008) which I could velcro onto my helmet.  Here’s a picture of me with a receiver on my head in New Zealand in August 2005 – I think I rode out from Auckland to Piha that day – good times… 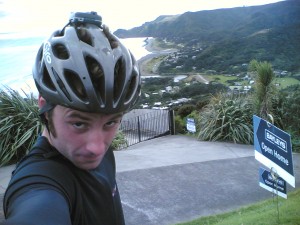 NAVMAN later released some cool matchbox sized receivers which were much smaller and could be stowed away in a pocket. Ultimately though GPS would be available on the phone itself (got a N95 around late 2007).

Throughout the time I was developing I maintained a task/wish/idea list. Having reviewed this there’s some entries that amuse me – especially given how things are these days, in order of date:

When I look back at that list one thing springs to mind – where has the time gone! 🙂

During the time I was developing it I used GPSjake a lot when riding my bike – it proved really useful.  If I had it running on my current smartphone (Nokia Lumia 920) I’d still use it (another task for another day).

BTW GPSjake is named after a loyal steed of mine Jake The Snake (here’s Jake and me and the cobbles of Roubaix) – in other words another gratuitous cycling shot for no real reason:

The app allows the user to do the following:

I should mention that me ol’ mate @juannacho a.k.a Mr John Denton provided the app’s graphics for me.  Thanks sir!

Some videos of GPSjake in action

Here’s a video showing the functionality of GPSjake when running on an N8:

(filming these videos took me back – there’s no denying that Nokia made some truly great phones and were a *long* way ahead of the game – shame this slipped for a time – i’m sure the good times will return though!)

Using a photograph of an OS map

* Let’s face it. The OS make the best maps for cycling in the UK and if you’re cycling offroad are the only map of any real use. As a user and fan of the OS I liked the idea of taking a photo of a map I had bought and using it for navigating whilst out and about – this saved the paper copy. Copying the map in this way for personal, non-commercial use is allowed under the principle of ‘fair dealing’ set out in the Copyright, Designs and Patents Act 1988. The following text must be displayed on the copy:
Reproduced by permission of Ordnance Survey on behalf of HMSO. @ Crown copyright. All rights reserved.

** Please note if, after reading this post you want to explore the app further, it is your responsibility to ensure your activities comply with the relevant copyright requirements. I ain’t doing a stretch for you in other words 🙂

Here’s a video I made using the video editor app on the N8 which tries to convey the best way to take a photograph of an OS map *that you own* using a phone – basically ensure the phone is not tilted/rotated, use the gridlines in the camera app to line the map up against the OS gridlines and don’t use a flash.

Here’s the source code for GPSJake.  I’ve made this available under GPLv3 and it’s hosted at the Nokia developer site https://projects.developer.nokia.com/gpsjake/.  Or you can fork this https://github.com/thunderhoss.

This program is free software: you can redistribute it and/or modify it under the terms of the GNU General Public License as published by the Free Software Foundation, either version 3 of the License, or (at your option) any later version.

This program is distributed in the hope that it will be useful, but WITHOUT ANY WARRANTY; without even the implied warranty of MERCHANTABILITY or FITNESS FOR A PARTICULAR PURPOSE. See the GNU General Public License for more details.

You should have received a copy of the GNU General Public License along with this program. If not, see <​​​http://www.gnu.org/licenses/>

Throughout the development of GPSjake I used the following tools…

IDEs: Eclipse and Mobile Tools for Java, Netbeans and Wireless Took Kit.  I started out using Netbeans but switched to Eclipse this is currently the IDE of choice at work.

It feels good to give ol’ GPSjake it’s final resting place and share it through this blog.  Although developed for old technology I think it still contains some good ideas which aren’t offered by other apps in the personal navigation / mapping space (e.g. pre-recorded, custom voice prompts).

And with that I’m off to develop on a different platform altogether……Windows Phone (once I’ve got some more Arduino business out of the way).